I’ve exhausted the amount of photos allowed of my once involved daughter. Her reaction is like an A-lister hand towards a pap. “No more!” she protests. And don’t even mention photos to the husband.

Just over 6 weeks into lockdown, I’m in desperate need of a creative outlet. Online there’s signs of other photographers feeling the same – one taking impressive pics of trainers from every angle, others raiding photo archives to keep that sense of connection, and there’s the worldwide ‘doorstep portraits’ idea. Wondering whether to offer the locals, but the news reports are as contradictory as the daily update – ‘What a heartwarming idea!’ then ’Photographers, stop. It breaks lockdown protocol’.

Sigh. I thought once about taking my camera to Tesco for some tinned soup action – worked for Warhol, right?

Garden and daily walk snaps it is then.

In walks The ‘McQueen Creators’ campaign. Alexander McQueen have been running a weekly project for independent artists during isolation (with a chance to be featured on their social media channels).

Last week’s campaign #McQueenNature for photographers – “taking inspiration from nature: now more than ever its beauty and ability to regenerate is a symbol of hope and quiet power”

An escape from financial worries, news reports, everyone sharing opinions and arguing about the news reports (the memes are funny tho!), and spent a few days in a creative bubble.

Reviving an old instagram account, I submitted a bunch of images. Then immersed myself in a violent Scott Adkins movie (Avengement) with the husband. Movie recommendation!

Checking my phone at the end, I’d received various notifications. In amongst them ‘We’d like to feature your image’ from Alexander McQueen.

My already adrenaline filled body kicked it up a gear. WHAT?! 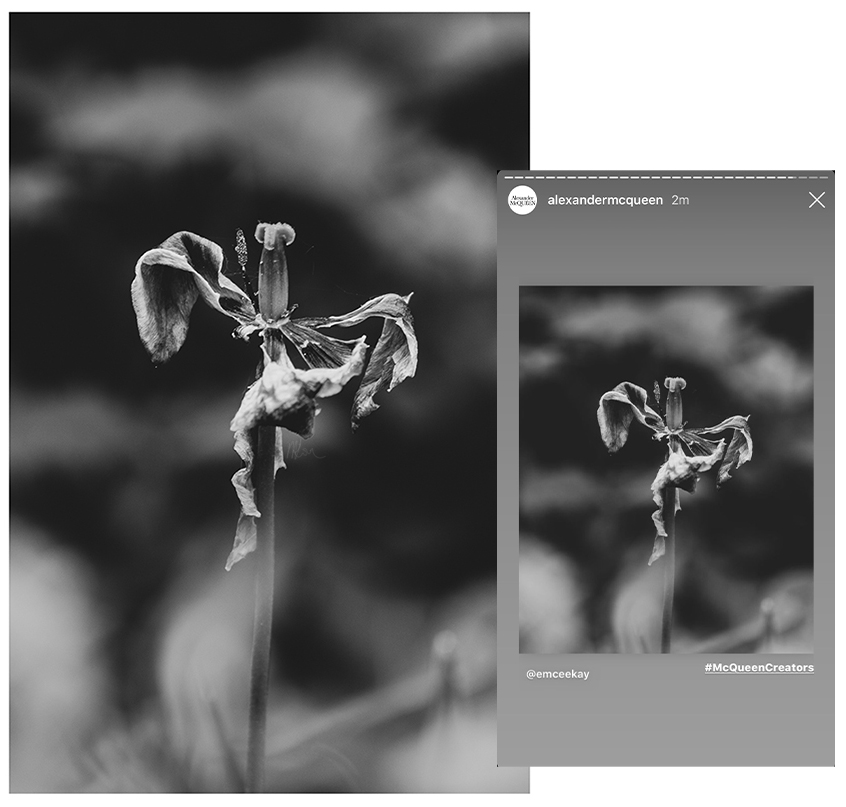 The Wilting Tulip. Selected and featured along with 100 other photographers pieces for Alexander McQueen. Never thought I’d say that in a sentence.

I’m offering prints of this with 20% profit donation to the NHS.